Get fresh music recommendations delivered to your inbox every Friday.
We've updated our Terms of Use. You can review the changes here.

Casualties of a Rape Culture

from We Don't Need Them by Appalachian Terror Unit 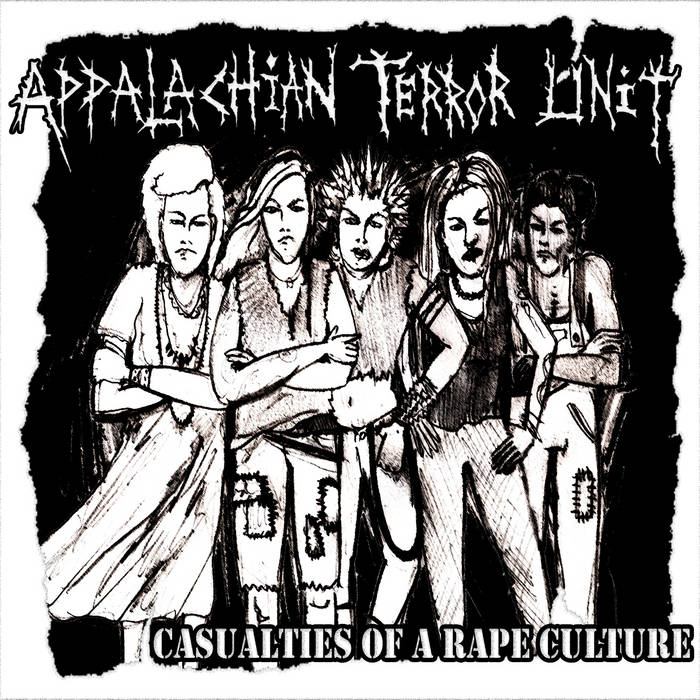 The weight of normalized sexism. Pretend it doesn’t exist.
But rape is still used as a tactic of war, and you still control my sister with your fist.
Breast feeding is an obscene act to be hidden while rape jokes are supposedly funny and if they are not your uptight.
Validate us, “Hey you’re a pretty good whatever for a girl”.
Trivialize our story and even condone violence inflicted.
Sick of hearing girls be told how to behave to not get raped.
Victim blaming an automatic response like its every girls fate.
You’re a slut if you fuck and a prude if you don’t.
Instilled with a sense of inferiority to remove prospect of pleasure.
“Bitch” code for practicing any necessary self-assertion.
No I don’t want preform for every man I pass on the street.
Can’t have a day without hearing “Hey baby give me a smile”.
Made to feel guilty for being harassed like I did something wrong.
So fucking sick of being talked over and ignored.
Women locked away in dungeons for fighting back.
Striped from the natural world severing the cord.
Daughters kidnapped and married off to please old men their toys replaced with tears and blood.
An expectation of behavior little girls measuring self-worth on plastic and airbrushed idols.
Sick of being made to feel inferior.
Sick of having to fight to have a voice.
Gender-set limitations diminishing our human worth.
Conveniently substitute the word sex for rape something 1 in every 5 women face.

You were drinking, so what did you expect
Maybe not to be treated like a fucking object

Instead of support, a total interrogation
Must have knowingly emitted some flirtation

What did you do to cause your own assault?
Obviously it was your fashion senses fault

Questions about YOUR choices, not the rapist
Making pathetic excuses for an act so heinous

Or how about being just totally ignored
People figure you made it up, you must be bored

He wouldn’t do that, or just hey fuck it I like his band
Hey maybe no one will notice, after all they have a tour planned

Sisters of the world we will never be quiet,
We have a voice we will not drown in the silence

from We Don't Need Them, released August 7, 2014
*Rape culture, Slut shamming, Sexual violence. Non of these things should ever be tolerated. Much less within the punk scene. If you see something say something ... Do something.

Bandcamp Daily  your guide to the world of Bandcamp